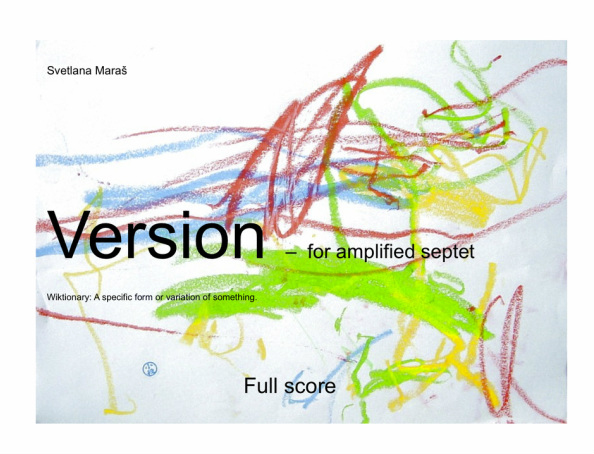 Scribbling is a way children draw. It’s a way of representation. When being asked about they scribbles, children would often say that the picture represents a mother or a father or a even a house. These seemingly randomized and amorphous drawings are amazing insight into different meanings that children subscribe to them. And if analyzed properly, some universal meanings of these scribbles can be discovered. This is a method frequently used in psychoanalysis of children with trauma which helps to reflect their unconscious thoughts or hidden emotional conditions.
In Version, I was questioning the ways of musical scribbling. Of blurring the functions of musical material and making them explicit at some points only. Development occurs within of the two main structural parts of the piece, and it’s based on the constant shifting from ambiguous to obvious representation of two dominant musical ideas. Elements of structure are compounds of melody, harmony and rhythm and while their roles are changeable (these elements keep moving from foreground to background), the only constantly present musical feature is the specific texture of the work.
Influences and inspiration for this piece can be found in the work of David Lang, philosophy of Nelson Goodman, theories on children’s’ drawing, children’s’ and outsiders art.